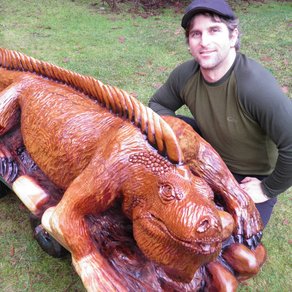 Kevin Lewis was born and raised in the Comox Valley. He was given his first chainsaw at age 11. Kevin has been a Logger since he was a teenager and has been chainsaw carving since 1996. His career has allowed him to carve in most provinces across Canada and he has been recognized for his creative talents as a fine art wood carver.

Kevin can carve any creature his imagination allows -  hard to believe they are created from a chainsaw. Specializing in fantasy art and wildlife art, he includes these in functional pieces such as headboards, benches, tables, mirrors and planters.